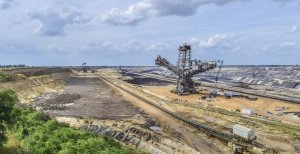 The authorities in Bucharest are struggling to keep the coal mining and thermal power plant complex above water. Romania is preparing the ground for four solar power units to be installed in a mine and slag and ash ponds run by state-owned CE Oltenia.

Complexului Energetic Oltenia SA has commissioned the study on the upcoming restructuring until 2025 and it will cost EUR 500,000, Romanian media reported. The country’s second-biggest electricity producer started the procedure to overcome the transition from coal with new photovoltaic capacity and avert a looming liquidation. Romania plans to install four solar power plants in the coal mining complex, planned for a shutdown as CE Oltenia can’t afford the rising costs on carbon certificates.

The utility with a share of 25% to 30% took a disputed six-month emergency state loan of RON 1.2 billion or EUR 251 million, Profit.ro noted in a report. The deal has failed to pass the Senate of Romania on legality issues.

The credit package may be transformed into a restructuring fund in case of a default. The company is considering its options for decarbonization and development and the impact of necessary investments, particularly layoffs. The 3.24 GW in total electricity capacity is mostly from 12 coal-fired systems.

The plans revealed the government in Romania wants to build a 95 MW solar power plant in Tismana open pit and units of 80 MW, 75 MW and 60 MW in the closed sludge and ash deposits in Turceni, Isalnița and Rovinari, respectively, run by CE Oltenia.

The ailing fossil fuel conglomerate also has the task to rehabilitate and upgrade small hydropower plants Turceni – 9.9 MW and Isalnița, 2 MW. It counts on assistance from the European Investment Bank (EIB) and the European Bank for Reconstruction and Development (EBRD) as well as European Union funds, the documentation showed.

The four projects should apparently span 595 hectares and the targeted capacity utilization is at least 15%. The Eastern European nation holds 77% of the said coal and power complex. The decision makers expressed the intention to sign 20-year contracts for the solar power endeavors and demand a guarantee that the efficiency wouldn’t decline by more than 20% by the end of the period.