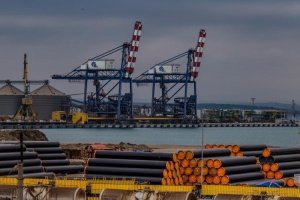 Bulgaria, with more than a little encouragement from the European Union, is about to embark on a long-awaited plan to diversify its sources of natural gas.  With Russia presently providing more than 80 percent of the country’s gas requirements, Bulgartransgaz, Bulgaria’s state gas firm, is seeking up to 400 million euros to finance an extension of the TurkStream gas pipeline and other gas projects in the country, including the construction of a gas link with neighboring Serbia as well as the expansion of a gas storage facility in Bulgaria.

Bulgartransgaz has to make advance payments to Saudi-led group Arkad, which it has contracted to build the 474 km pipeline extension dubbed Balkan Stream for 1.1 billion euros, and to a Bulgarian-led group that will install two compressor stations for the gas link.

The aim, the company said, is to secure financial resources for the investment programme of the company, aimed at diversifying gas sources, increasing security of supplies and establishing the country as a regional gas hub,” Bulgartransgaz said in a statement.

Balkan Stream, which will carry mainly Russian gas from Bulgaria’s southern border with Turkey to its western frontier with Serbia – providing a link to the Russia-backed TurkStream twin pipeline to Serbia and Hungary – is expected to become operational by the end of the year.